this series is so good.

Alan Sitomer's Caged Warrior series is a kick ass young adult novel collection that your middle and high school aged boys are sure to love. The second of the series, Noble Warrior came out in July and is just violent enough to make the kids who hate reading want to read for pleasure. 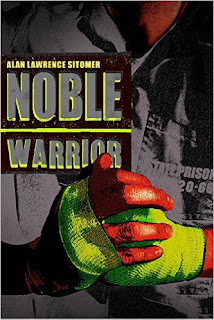 The series revolves around McCutcheon Daniels' who is a star fighter in an underground Mixed Martial Arts circuit in the slums of Detroit. These are fight to the death kind of fights, and he is forced to compete to appease his crazy father, and keeps himself alive to protect his little sister. You'll have to read book number one for yourself to get the rest of the details on that one.

Noble Warrior will spoil Caged Warrior, just a little warning before I continue. In Noble Warrior, McCutcheon, his mother, and sister are now in the Witness Protection Program, but McCutcheon still cannot escape his demons. So instead of playing it safe, he decides he wants revenge, and he'll do anything to get it.
at Thursday, September 03, 2015