it may kick ass for you.

I honestly only have eyes for her aunt? relative of some kind? -  but I had to give Stephanie Evanovich a try, and was pleasantly surprised by her debut novel, Big Girl Panties, which I reviewed almost two years ago, here. It was a tad raunchy, but her heroine was a chick I could get behind. 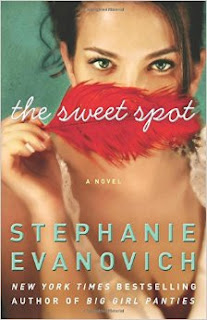 Now I just finished The Sweet Spot, which is Evanovich's second novel, and I want to say was a prequel? Because we met Amanda and Chase in her first novel, and they were already happily married. Well, I don't feel quite as warm and fuzzy about this one. It was like 50 Shades of Gray with a blue eyed Kim Kardashian, if she would have ever dated a baseball player and allowed him to spank her. It started off well enough. Amanda, semi-independent restaurant owner, business lady, foxy meets Chase Walker, America's favorite baseball player, (if America liked New Jersey) and he wins her over by coming into her restaurant every night until she will go out with him. Adorable beginning, really. And then the spanking came. I'm just not into it. Not that other ladies won't appreciate the gory details, the novel definitely still deserves to be featured on the blog, it just wasn't for me.
at Friday, September 04, 2015