the way this author strings together words is poetry.

Claire of the Sea Light by Edwidge Danticat is about a small, fishing community in Haiti that is in financial decline, and several of the people in it that don't seemingly have much of a connection to each other at first glance. Fisherman, and father to Claire, Nozias has debated giving his daughter away to a wealthier woman in his village for years, wanting a better life than he can give. When Claire disappears on her birthday and coincidentally the day her father's friend goes missing at sea, the residents of Ville Rose must deal with solving two mysteries. There are two parts to this book, each part carries four different stories, and as we are taken behind the scenes into the lives of other characters, some of privilege, some not, it gets a bit dark, mysterious, even magical. 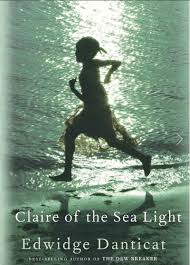