I just finished my first date with Jonathan Tropper. It was love at first sight. This Is Where I Leave You (the movie) hit theatres last weekend, which led me to download the novel to my Kindle a few days ago, and then love happened, like I spoke about earlier. 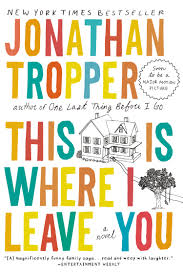 A not particularly kosher Jewish family is brought together to sit Shiva after their father passes away from a long battle with stomach cancer. Mind you the members of this family are SUPER dysfunctional and dangerously outspoken, and are forced to sit together in their parent's living room for seven days while the community comes to pay their respects, feed and visit them. Narrated by Judd, (child #3 out of 4 siblings) who walked in on his wife banging his boss a few months prior and is now forced to face his family, sadness and pudgy belly is not even in the worst shape of the bunch. Paul and his wife Alice are on a baby making schedule that doesn't stop for Shiva (and that gets really weird). Wendy is married to an ass of a man that she kind of hates, raising her children that she also kind of hates. Phillip, the baby of the family brings his new girlfriend who's twenty years older than him to meet his family, like it's the perfect time or something. And their mother, oh Hillary. Mourning the loss of her husband in her short skirts and low-cut shirts showing off her fake boobs and hiding more than everyone else.

I have never met a family of characters that I liked more than the Foxman's. Now excuse me while I go gobble up the rest of Tropper's novels.
at Wednesday, September 24, 2014

Email ThisBlogThis!Share to TwitterShare to FacebookShare to Pinterest
Labels: Books to Movies, Novels