Fourteen-year-old Trevor Riddle was plucked from his seemingly normal life with his two parents in Connecticut and moved to Riddle House, his father's family's ancient estate after his parents announced that they were not only bankrupt, but separating. Riddle House is a mansion where Trevor's grandfather still lives, and is not planning on going anywhere anytime soon. Many readers have assumed that fourteen-year-old Trevor is narrating the story, and that is kind of true, but really it's adult Trevor's account of what happened twenty-three years earlier, in 1990, which is why our narrator sounds so much more mature than a young teenage boy. Just to clarify. Moving on. 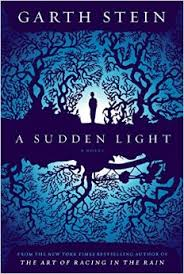 A Sudden Light by Garth Stein is actually a ghost story, which our precocious narrator quickly learns as he explores his ancestral estate and discovers spirits as well as dark family secrets. If you enjoy multi-generational family stories and lots of twists and turns, you will surely love this novel.
at Friday, September 19, 2014