from the mouth of nixon.

In a nutshell, The Nixon Tapes: 1971-1972 transcribes Nixon's most interesting and influential year as president of the United States from the actual tapes that recorded him and his staff in office during that time period. Historical experts, Douglas Brinkley and Luke A. Nichter have been through all the tapes, plucked out the important stuff (well, the stuff they found important for the sake of this particular book) and edited it in a way that readers can easily follow. There is much on the tapes that made Nixon look bad, but I enjoy that the authors decided to show his intelligence as well. I mean, he was super jealous and extremely paranoid, but he was also pretty fricken brilliant. Although the authors do not focus on Watergate, they do focus much of the book on foreign relations, which may either make or break your interest in picking up a copy. 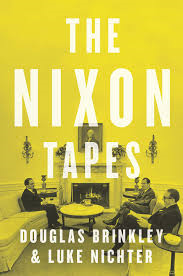