five ladies and a baby. 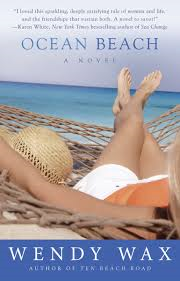 Ocean Beach by Wendy Wax is an amazing follow up to Ten Beach Road. The crew is back together to give a house in South Beach Miami a facelift. The only difference is that they are now being filmed 24/7 by...Lifetime. Madeline, Avery, Nicole, Kyra and Deirdre (Avery's prodigal mother) blew away the YouTube world during their first stint remodeling Bella Flora, when a hurricane tore through the town and the beautiful house, Lifetime decided to pick this bunch up and turn them into a reality show titled Do Over.  So the ladies fixed up Bella Flora (again, in the same way they did the first time with Kyra filming), and now the pilot is set to run sometime this summer while they are fixing up the Millicent in Miami for their second season (hopefully) of the show. That's all back story, Ocean Beach is set specifically in Miami and The Millicent belongs to an elderly man named Max Golden who promised his wife on her death bed that he would return the home to its former glory. All the ladies fell in love with this ninety-year-old former Comedian, it was impossible not to. All of their stories easily pick up where Ten Beach Road left them 8-9ish months ago, Kyra is raising her son (remember she was knocked up by a movie star) alone, Maddie and Steve still have some major tension, Nikki and Giraldi also have some major tension, but it's the sexual kind, and Avery and Deirdre are still on the outs. It's a great story with excellent details included on how The Millicent was brought back to life.
at Wednesday, September 17, 2014