It took forty years for journalist and veteran Robert Timberg to write his memoir covering some of the time he spent overseas in the Marines during the Vietnam War, and his recovery afterwards. He was shaving for the umpteenth time, over the scars on his face caused by third degree burns from a land mine that ended his 13-month tour a mere 13 days early, and just got really pissed, pissed enough to finally sit down and write his story. A what a story it is. 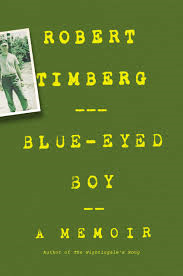 In Blue-Eyed Boy, Timberg describes his journey through the realities of his disfigurement, thirty-five surgeries that didn't do much to hide his scars, and his search to find meaning in his new life. This meaning turned out to be journalism. Timberg recalls getting his first real story as a cub reporter about a woman who had jumped off a bridge. He pushed for that story, questioning everyone at the scene, letting his work overtake him and his insecurities, he realized afterwards that he wasn't thinking about his scars. At the height of his career he was a White House correspondent for The Baltimore Sun, which in turn, lead to his first book, The Nightingale's Song. I know readers will be thrilled (like I am) that Robert Timberg decided to finally face his past and share his story with the world.
at Tuesday, September 16, 2014