life in the 2050's London underground.

Young adult science fiction novels are all the rage right now, and keep 'em coming people! I have some really difficult readers that I'm working with and it takes a little super-humanness to catch their interest. My latest YA read worth reviewing is The Bone Season by Samantha Shannon which centers around 19-year-old Paige, a girl with supernatural powers who lives in an authoritarian future London where "voyants" like her are hunted, imprisoned, and executed because they are considered unnatural. A little gruesome of a storyline for my taste but hey, the kids love it. Moving on, Paige works for the criminal underground but is captured and sent to the Rephaim prison city where she is chosen to be the ward of a Rephaim named Warden whose behaviors and actions are quite unlike the other Rephaim...DUM DUM DUM. 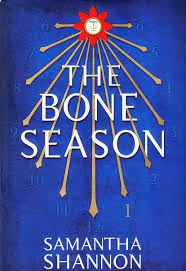 Shannon went into great depth building this alternate reality universe in the London underground with characters teens can easily connect with. I'm looking forward to number two.
at Wednesday, August 13, 2014