if you don't know rodney walther, you should.

I am constantly picking up books by authors that I've never heard of because let's be honest, I read too much (and drink too much, and eat too much, etc.). About 50% of the time an unknown writes something that I truly enjoy, and Rodney Walther is one of them. His latest, with the very clever double meaning title, Space in the Heart, begins and ends with real life difficulties humans can face in a lifetime, making the book not only relatable, but a major page turner. 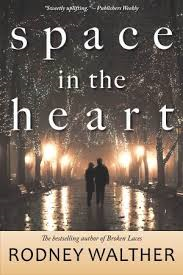 Former astronaut, Garrison Sterling lost his wife and his young daughter ended up in a wheelchair in one fell swoop, along with his dreams of going to space. Zoey is now an extremely misunderstood teenager unable to live like normal kids her age. Life is hard. Then Garrison meets Danica Cortez, a vivacious television news anchor who is his first real attraction since his wife died, and almost as dysfunctional in love as he is. These three characters are the perfect mix of comedy and drama.
at Wednesday, August 06, 2014