The Sheriff Walt Longmire mysteries are similar to the Stephanie Plum novels in the sense that you can't expect me to review all of them because there are just too many, that's pretty much where the similarities end, other than the fact that both series are fantastic. Craig Johnson is back with his tenth installment titled Any Other Name, and I'm here to rave about it just like I did last summer with number nine. 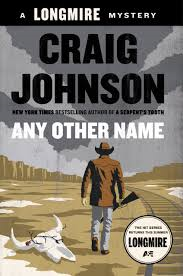 The third season of A&E's "Longmire" premiered in June, so coming out with Any Other Name in May was pretty smart, I wish I would have thought to read it then, would have made much more sense, but when you're planning a wedding you just hope the people in your life let things slide. Anyways, in this modern day western Longmire travels to a neighboring county to investigate the alleged suicide of a police inspector. We have our typical gang of Lucien, Vic, Henry, and Dog plus some new characters from the Campbell County Sheriff's department, and other places traveled to in the book. Included are some hilarious one liners, and a storyline that is fresh and original.
at Thursday, August 07, 2014