a memoir about not losing yourself in love.

As a recently married woman, it is hard enough making a relationship work with a natural born American man, six years older than me who grew up 20 minutes outside of the city I grew up in, let alone if he was fifteen years my senior, Muslim, and grew up in an impoverished Libyan village. Confused? I just read Krista Bremer's memoir titled My Accidental Jihad where she shares how she met her husband (while jogging), who reflects the second characteristics I mentioned in my intro, and how they make their bi-everything relationship work, with kids, in-laws, and their very different cultures IN the dirty south (North Carolina). Bremer is a great storyteller, I loved the way she wrote about her daughters so honestly, allowing them to decide for themselves what part of their American and Muslim cultures they would embrace, and then worrying when Aliya decided to cover her head like so many other modest Muslim women. Definitely one of the more interesting memoirs I have ever read. 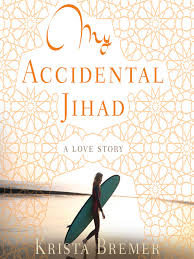