Daniel Brown's The Boys in the Boat is the account of the nine man University of Washington rowing crew that won gold in the 1936 Olympics in Berlin. Through loads of research Brown managed to create a narrative story told mostly from the perspective of one of the rowers, Joe Rantz, who had the type of childhood that would of lead most people to an early grave. This is a tale about young men from different backgrounds learning to work as a team and overcome tremendous obstacles, and that in and of itself makes it a must read. However, Brown's description of the current world events of this time period, the Great Depression and the rise of Nazi Germany, makes this a story about much more than rowing. 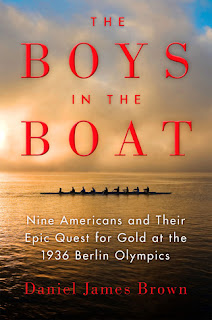 Email ThisBlogThis!Share to TwitterShare to FacebookShare to Pinterest
Labels: Based on a true story