I JUST finished The Book Thief by Markus Zusak (I know, where have I been, right?), and I am still getting over it, haven't been able to move on to my next novel since. I miss Hans.

Let me give a little premise for those of you who haven't read the book, and are interested in doing so. Especially since the movie is now sitting at your local Red Box. The first thing you should know is that the novel is narrated by death. Or the angel of death. A spirit of sorts that takes the souls of the dead and brings them to...Heaven it appears but doesn't specifically state. So yeah, death narrates the story of young Liesel Meminger, a German girl who becomes the foster daughter of Hans and Rosa Hubermann after her mother delivers her to their home for reasons Liesel does not understand at the time. The story is set mostly in Munich, and takes us to other parts of Europe as WWII erupts and Hitler takes control.. There is so much to say about this story, I don't know where to begin. When Liesel first sets foot into the home of Hans and Rosa, we instantly see the kindness of Hans, who stays up with the girl after every nightly nightmare. Since she wasn't properly educated before this point, it is Hans to teaches her to read in the basement of their home in the middle of the night. He is the one who read the very first book she "stole" with her, and their relationship is so beautiful. And then there's Rudy, Liesel's best buddy and stealing (books, apples, etc.) partner in crime. And Rosa, who is so horrid, yet will do anything for her family. And Max, the Jew hidden in the Hubermann's basement who wrote a book for Liesel to read as she always longed for a new book in a time where no one could afford anything. I loved these characters. As death narrates, he is kind enough to warn us of some of the tragedy before it happens, to soften the blow. But honestly, nothing could have prepared me for how this story ended. 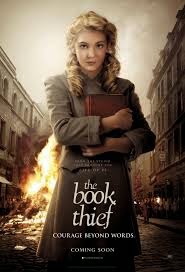