well that was eloquent.

There is much to say about the government and religion, whether they should be kept separate or the idea that one cannot be without the other. Our country was founded on a belief in God. And that's all that I'm going to say about that. Robert Boston has more to say in his book Taking Liberties: Why Religious Freedom Doesn't Give You the Right to Tell Other People What to Do. 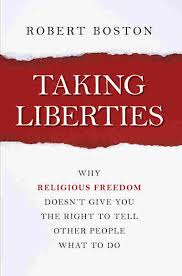 Boston covers all of the major controversies facing our world today: birth control, same-sex marriage, religion in public schools, Christmas, etc. and he's super nice about it. The main idea is that you should worry about yourself and no one else. If you don't want to kiss a girl (and like it), then by all means, don't kiss a girl. If you don't believe in birth control then don't take it, girlfriend. It's actually really simple. Respect other people and what they believe, and they will respect you.


I am all about religious freedom, but imposing your beliefs on other people is just annoying. Christian's get SUCH a bad rap for that. I once took an afternoon to volunteer for a religious nonprofit and had this other volunteer damning me to hell if I didn't believe exactly the way he did. It made me embarrassed to be a Christian, and when I see him from time to time, I hide. Bullying people into believing what you believe or their "going to hell" is not being a Christian, it's being an asshole. I'm going to start dropping Boston's book anonymously around town.
at Monday, May 19, 2014