I try to make it a habit to not get too invested in the news. It's depressing, scary, and honestly kind of offensive. I don't typically share my opinion about politics, big murder trials, or even the Clipper's owner's racism because EVERYBODY has an opinion and the ones who share them are usually single-minded. So I'm going to keep quiet and objectively review the expose on Trayvon Martin's murder and George Zimmerman's trial by Lisa Bloom titled Suspicion Nation: The Inside Story of the Trayvon Martin Trial and Why We Continue to Repeat It. 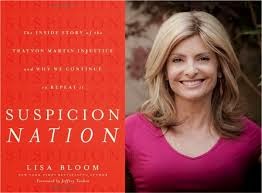 I know you all have your own opinions regarding the outcome of the Zimmerman murder trial. Some of you agree with the verdict of not guilty, some of you think it was a major upset. Whatever your personal opinion is, I would still consider Bloom's research a proper read for you if you are the type of person who enjoys diving into the nitty gritty of murder trials, courtrooms, jury interviews, etc. OR if you are a Veronica Mars fan as the first half of the book lays out the errors made by the state in proscuting George Zimmerman, and there were a lot.

The second half of Suspicion Nation goes over how Americans have arrived at this place in history. Covering the many reasons why blacks are racially profiled and the racial bias we all hold in some shape or form, even though we don't want to. And yes, Bloom herself delivers a bias review of the case because it's obvious who's side she's one, but the girl has done her homework. So don't hate.
at Wednesday, April 30, 2014