if you include robberies and hand grenades light reading...

Janet Evanovich and Lee Goldberg's second installment of their Fox and O'Hare series, The Chase was one of my Spring Break reads. As you can see, I would read while manfriend napped. We had a pretty good thing going there in Puerto Rico. 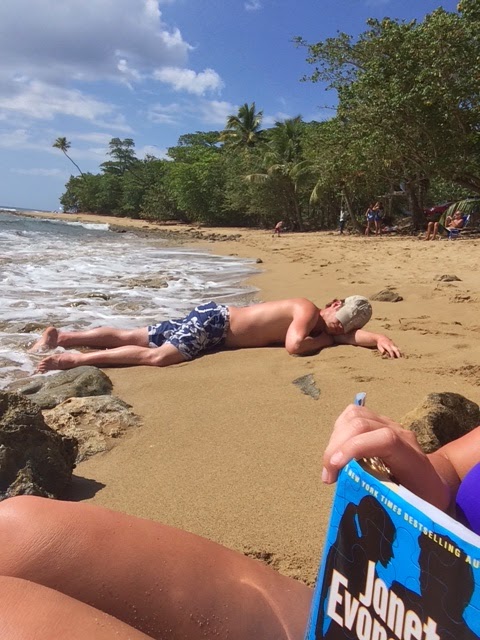 FBI Special Agent, Kate O'Hare and professional conman, Nick Fox work together to catch the world's most wanted criminals. Ironically, Fox is in the Top 10 Most Wanted club himself, but that's beside the point. In this story, the two are out to catch former White House chief of staff, Carter Grove who has a stolen rare artifact that the Smithsonian needs to give back to the Chinese, because nobody wants to piss off the Chinese. When Nick and Kate (and their silly assembly of sidekicks) get inside Grove's mansion down in Florida, they discover a secret room that leads them to the stolen booty. In that room they also find the largest stolen mini art museum off record, and Fox just can't leave it alone. Together, with the gang, and along with Kate's dad for backup, they pull off one of the most ridiculously amazing con/robberies in the history of Canada and America. My only issue is that I would like the obvious sexual tension between Kate and Nick to lead to actual sex. That would be nice.
at Tuesday, April 29, 2014