everything is perfect, until it isn't.

Well let me tell you something, Before We Met by Lucie Whitehouse is NOT the novel you want to read 4 months before your wedding day. Here's why: Thirty-something Hannah has never been one for commitment. Watching her parents marriage fall apart turned her off to the whole idea of true love and that gushy stuff. Until she met Mark, fell in love, got married and moved back to London. After 6-months of marital bliss, Hannah finds herself at the arrivals gate at Heathrow to meet Mark after one of his business trips to New York and he fails to show up. After calling and emailing with no response, and discovering he's never checked into his usual hotel in New York, Hannah's terror turns to suspicion when she follows up with his office and they have been fed a different story about her husband's so called whereabouts. 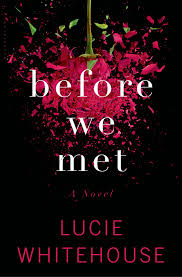 The next day, Hannah gets a phone call from an apologetic Mark who explains the reasons he was detained and unable to call. Hannah doesn't let him know that she suspects he's a big fat liar. Instead, she spies, and rather than finding answers, she only comes up with more questions about the man she thought she knew.
at Thursday, March 13, 2014