a turning point of violence in america.

Twelve-year-old Thomas Walker is pretty pumped when his traveling salesman dad takes him out of NYC and onto the road hoping to sell Samuel Colt’s recent invention, the first revolving gun. Ironically, three days into their adventure, Thomas's father is robbed and shot dead, leaving him orphaned and alone, and leaving me wondering where Robert Launter is going with this story. Then steps in Henry Stands, a former ranger who reluctantly takes on responsibility for Thomas as they make their way back East. Keep in mind that it's 1837, so it really is quite the journey, and both characters have anger inside of them. Road to Reckoning is narrated by an adult Thomas and his recollections from childhood, he tells his own coming of age story about revenge and civility. 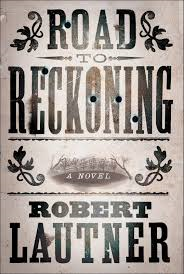