even the horror lovers will be disturbed.

I actually enjoyed reading Lord of the Flies in high school. I mean, I thought it was a little wild, but it kept my attention more than Beowulf, so I wasn't complaining. Now take Lord of the Flies and turn it into a straight up horror story, then you have The Troop by Nick Cutter. This is some terrifying shit here people. Every year Scoutmaster Tim Riggs leads a troop of five boys into the Canadian wilderness for a weekend camping trip. It's a nice tradition, bringing boys different backgrounds and personalities together. Tim is feeling good because all of the boys get along pretty well, and every one's having a nice time until a rabid animal of a man steps onto the scene. And the second the Tim came to this ill man's aide is the exact moment when that imaginary track & field shot gun fired and the entire troop's race with death began because what Tim didn't know is that the very island they were camping on was quarantined. What this troop is up against once their leader is gone is something you have to read to believe. Good luck going to sleep after this one. 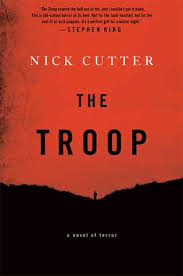