It never really occurred to me how other European countries, like Italy, were affected by the destruction of WWII until I read Saving Italy: The Race to Rescue a Nation's Treasures from the Nazis by Robert M. Edsel. I mean, the happenings in Italy during this time period, especially in Naples, Milan, Florence and Monte Cassino are unknown to the average person, which is why Edsel's follow up to his previous book Monument Men is such a crowd pleaser with every reader, historian or not. Saving Italy is a true account of the allied effort to save valuable artwork in Italy from being destroyed in battle or seized by the Nazi's. Seriously, how greedy can a group of people be? Jeesh. Anyways, in May of 1944 an American artist named Deane Keller and scholar named Fred Hartt set off to track billions of dollars in missing Michelangelo's, Donatello's and other ninja turtles, I mean famous artist's work from history. They literally risk their lives to steal back what was stolen, and Edsel tells the story in such a suspenseful way that you'll be on edge until the very last page. 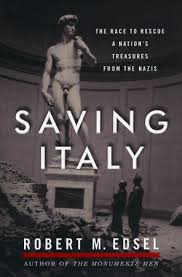