a great president who you probably forgot about.

Author Amity Shlaes sets the record straight regarding President Calvin Coolidge and his not so positive reputation in her biography appropriately titled, Coolidge. For those of you who did not pay attention in history class, Calvin Coolidge was the thirtieth president of the United States and served during the 1920's, ending his term in 1929, just as the Great Depression was beginning. Coolidge was a quiet man, and people judged him for it. However, he worked behind the scenes to reduce federal debt and income taxes which favored middle class growth. Shlaes is adamant in her opinion that Coolidge was not responsible for the Depression, including statistics proving that the blame lay in the later presidents who prolonged the economic decline. 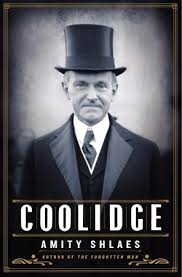 Apparently Coolidge is most remembered for being cold and lazy, probably because he didn't babble on about everything he was planning on doing on live television, interrupting people's favorite television shows. I for one, would have appreciated him. There are some strong points of view, but I honestly believe that Shlaes has given us the most well-researched biography of Coolidge that anyone has ever read.