our responsibility to daughters everywhere.

I totally understand and respect what Dr. Elayne Bennett is trying to do with her book titled Daughters in Danger: Helping Our Girls Thrive. It really does take a village to raise a daughter, especially in society today where sex is amplified and values are not. Growing up, I was pretty wild. I didn't like to be told what to do, and that led to meaningless sex on a picnic bench at sixteen, which then opened up a giant can of worms for most the rest of my teenage years and early twenties. I honestly don't regret anything from my past, because I don't see the point in it. But I would never want any of my students to follow my lead. What I want for them is to stop and think BEFORE something really terrible happens. Which is what Bennett's resource is all about. 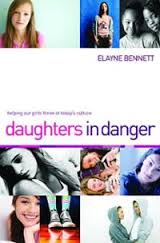 Bennett is a Christian and pro abstinence rather than contraception. She came up with the program, Best Friends in the 90's which was a community-based abstinence program that the Obama  administration put the kibosh on in 2008. Best Friends went to urban and suburban schools focusing on teaching young girls their value physically, mentally and emotionally. I don't think that expecting girls to wait to have sex until marriage is totally realistic, but I do think that teaching abstinence should be a top priority in public education. Why in the world should a fourteen, fifteen, sixteen year old girl be having sex? They won't even really be confident enough to do it right until their twenties anyway, making these teenage pregnancies totally not worth it. Anyways, Dr. Bennett goes on to explain the importance of programs like this and what EVERYONE in the community can do to save our daughters. Taking this information seriously could be the change you wish to see in the world.
at Monday, March 31, 2014