In John Dixon’s debut novel, Phoenix Island, our main character is a troubled teen named Carl Freeman. After his latest stunt that lands him into trouble, the judge offers 16-year-old orphaned Carl a chance to reform himself on Phoenix Island, a military style boot camp that is supposed to keep teens out of trouble until they turn 18. If he chooses the island, his record will be wiped clean, and as soon as he becomes a legal adult, he’s set to continue living his life. Sounds like a pretty good deal right? I mean, it’s the camp or jail. 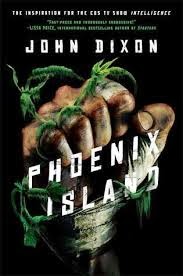 Carl travels to the island determined stay out of trouble and be on his best behavior. Even when trying to be good, Carl still manages to piss off his drill sergeant, and realizes that he needs to watch his back. Because it doesn’t take long to discover that Phoenix Island is hiding something disturbing. They aren’t reforming troubled teenagers; they are actually training kids to become mercenaries and killers.


I can’t wait to bring in this rollercoaster ride for some of my hood rats at school.

Win a FREE copy of Phoenix Island!
Contest Rules:
1. Follow this blog :)
2. E-mail your name and this book title to: jenileerose@yahoo.com to enter!
3. Contest ends 2/12