i want to be the honey trap!

Ya'll know how much I adore Janet Evanovich's Stephanie Plum Series, I've read all nineteen books, and while waiting around for number twenty, I decided that I needed a quick fix, so I read The Heist by Evanovich and Lee Goldberg. My opinion? Kate O'Hare is no Stephanie Plum Jersey girl with allllll that attitude, but she's not supposed to be. She's supposed to be an FBI Special Agent tomboy who's a daddy's girl, and I liked that, too. 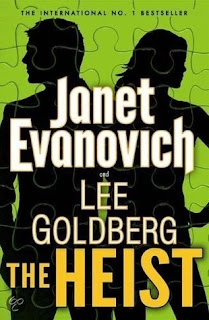 Kate has been chasing down mega con artist Nicolas Fox for years. The man dupes the rich out of millions and gets away every single time, while also stealing her Toblerone's (you'll have to read it to get it). When Kate finally makes the catch of her career she is taken aback a bit when the FBI decides to team the two of them up for a special project where the government does the duping. It's a quick and easy read with a cast of merry men (plus Willie), that will make you laugh out loud.
at Tuesday, September 17, 2013