Author Gregg Hurwitz gets right down to it in his latest novel Tell No Lies. No boring introduction before the story begins, he just takes right off and I love that in an author. 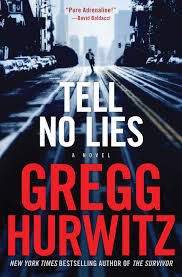 Main character Daniel Brasher decided to make a lifestyle change years ago. He left his lucrative job as a money manager to begin a career in counseling, which he loves, and is now moving to a private practice of his own. Sounds good, right? Wrong. Just weeks before he is scheduled to open his new practice, Daniel finds an envelope addressed to someone else in his work mailbox. It contains an unsigned warning on a single sheet of paper, giving the person a deadly warning to make an admission of guilt. But by time Daniel finds and opens the envelope, the deadline has passed and it is too late, a vicious murder takes place. This misdirected envelopes don't end there, Daniel spends the rest of the novel working with the police and trying to save the potential victims before their fate's are sealed. And as time passes, Daniel realizes that the murderer is much close to him than he ever imagined. Dum, dum, dummmmm.
at Monday, September 16, 2013