colin firth is dapper and all, but i'd prefer to find leo.

Mia March, author of The Meryl Streep Movie Club is at it again with her latest novel that came out in July titled Finding Colin Firth. In this novel three very different women are drawn to Boothbay Harbor, Maine all tied to each other unexpected ways, some having to do with Colin Firth, as he does pop in and out of the novel, which is a treat for Firth fans. 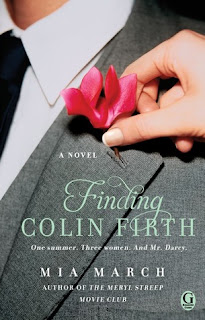 Twenty-two year old Bea Crane is still mourning a year after the death of her beloved mother when she receives a mysterious letter. Inside is her mother's deathbed confession admitting that Bea is actually adopted and enclosed is a copy of the agreement with the adoption agency. Which leads her to Boothbay Harbor...

Thirty-eight year old diner waitress Veronica gave birth to a baby girl when she was a teenager, who she gave up for adoption and then began traveling, working at diners along the southern United States. She has decided to go back to her hometown and face her past. Which leads her to Boothbay Harbor...

Twenty-nine year old Gemma Hendricks is a journalist who recently lost her job and hopes to get an interview with Colin Firth on the set of his new movie to save her career. Which leads her to Boothbay Harbor...

YOU read this review and picked up a copy of Finding Colin Firth which led you to Boothbay Harbor....enjoy!
at Wednesday, September 18, 2013