a brand new historical thriller novelist just for you.

The Yard by Alex Grecian takes place in the Victorian era. This historical thriller features the men of London's Scotland Yard who have been assigned to work on a special task force to investigate murders, (established following the Jack the Ripper cases). In his debut novel, Grecian developed a great group of characters, all enjoyable to read about. And his villains were creepy enough to give me goosebumps, as every good villain should. Very Sherlock Holmes-esque. 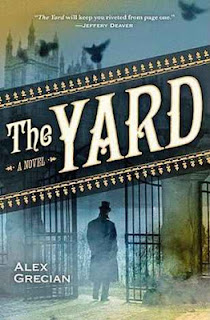 The Yard opens with an officer found murdered. In the following chapter, we find out who the perpetrator is and learn more about him. Written from the opposing points of view of the murderer and the detectives, Grecian builds a great deal of suspense, willing me to read on.
at Wednesday, October 17, 2012