who doesn't enjoy a psychological thrill-ride?

Deborah Crombie is a real crowd pleaser on account of she creates page-turners, which are all us avid readers really want in a novel. We want our eyes to bug out of our heads because we can't stop reading and page turning. Wahla, the secret to writing a great novel. I should teach a seminar or something.

Anyways, No Mark Upon Her is the story of a police officer named Rebecca Meredith who was found dead after going out for a row all by herself, and Duncan Kincaid who was called to investigate after what seemed to be really bad luck turns into a murder investigation. Apparently, Becca had a lot of people in her life who wouldn't mind if she accidentally drowned, who may have helped the process along some. This is a dead lady with a lot of secrets. 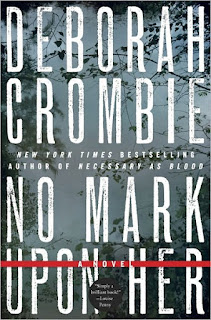 I hope that if I'm ever found dead, people are convinced that I must have been murdered because they don't think I'd be stupid enough to accidentally kill myself. I'd totally be stupid enough, but I reserve the right to the benefit of the doubt.
at Thursday, August 02, 2012