The Elemental Masters series written by Mercedes Lackey is known for being a bit fairytale-esque. Lackey bases each book on a popular fairytale, and puts her own fantasy twist on it. Home from the Sea is the eighth installment and based off of Tam Lin. If you are like me and have no idea who the hell Tam Lin is, I will explain. There are many different versions of the story, but I'll keep it nice and simple for you. Tam Lin is an old Scottish ballad about a young man who is the captive of the faeries, and the young woman who rescues him. As an independent woman myself, I liked where this was headed right from the beginning. 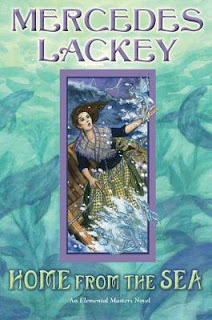 Home from the Sea is the story of Mari Prothero (our independent woman) who lives in a tiny fishing village on the coast of Wales. In her family, children are expected to marry at the age of eighteen to a predetermined suitor. Total fairytale style, just think of Jasmine. Mari has got some spunk, and she's not interested in marrying some stranger, but what she doesn't realize is that her arranged marriage is set up to protect her magical heritage.