No Rest for the Dead is a very special novel. It is special because TWENTY-SIX bestselling authors collaborated to create it. We are talking popular authors people, ones that you know. J.A. Jance, David Baldacci, R.L. Stine, etc. Celebrity authors. I'm sure you understand the significance without me going on and on about it. 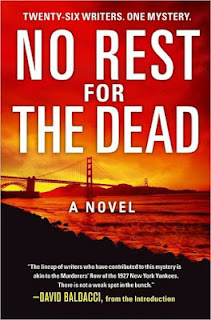 I don't know exactly how these authors accomplished writing an entire novel with so many hands in the pot, or however that expression goes, and still all living to tell the tale. As a teacher, I know that collaboration is not an easy feat. I am so impressed by how smooth the thrilling story line goes as we are taken through the story of Christopher Thomas' brutal murder who's wife was convicted and executed for the crime. Ten years later, detective Jon Nunn is convinced that the wife, Rosemary was not to blame, and is on the hunt for the real killer. A little too late there detective. It's a good story with a lot of suspects, enough to always make you wonder if it was Colonel Mustard in the library with the candlestick or Mrs. Peacock in the kitchen with the knife.
at Wednesday, August 15, 2012