just in time for the end of the olympics.

Well the Olympics are over and that's when I decide to review an Olympic themed book. Normal. I have been very un-American lately, and have barely watched the summer games. I saw the Williams sister take the gold in tennis over that awful grunter Sherapova, and that was about the extent of it. Oh well, a sports memoir should make you feel better.

Amanda Beard first appeared at the 1994 Olympic games in Atlanta at the very young age of fourteen. Is there no age limit for the Olympics? Serious question. Anyways. She left with two silvers and one gold medal that year. Beard is a pretty girl, and took advantage of her sex appeal when she got older by posing for Playboy, which leads to harder things, like bulimia and drugs apparently. She was seriously screwed up, and spent years destructively ruining that beautiful Olympic gold body. Her memoir is about her journey from the top of the platform to rock bottom, where her then boyfriend and now husband literally saved her life. In The Water They Can't See You Cry is a fabulous truth of transformation and starting all over again, even when you already seemed to have it all. 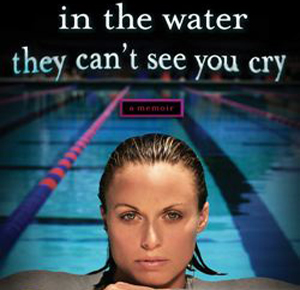