IRELAND! hey! i've been there.

City of Bohane by Kevin Barry is set forty years in the future in (you guessed it) the city of Bohane located on the west coast of Ireland, which is why I wanted to read it, because as I brag about daily, I recently toured Ireland. And yes, I will use a fictional story to keep talking about my trip. 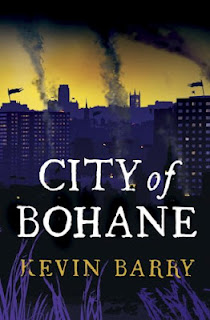 Bohane used to be this great city, but fell apart as social order broke down and the running of commercial and social life were under the direction of Logan Hartnett, the leader of the strongest gang. Once Hartnett's old nemesis is rumored to be back in town, the fun really begins. The book is basically one big power struggle, with quirky characters and a dialect that includes Irish slang which may be a little confusing at first, but if you survived The Girl with the Dragon Tattoo series, you can survive anything. It's definitely different, and I really believe that those of you who are a little more adventurous in your reading lives are going to appreciate it.
at Saturday, April 14, 2012