Vincent J. Pitts did an excellent job chronicling the life of Henri IV, or Henri the Great as the people fondly called him, in Henri IV of France: His Reign and Age. 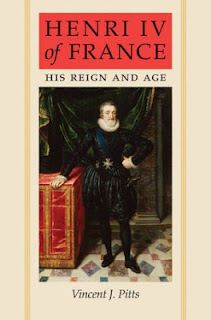 Henri was not even remotely welcomed as heir at the beginning. He was forced to renounce his Protestant faith to take his place as king on the Catholic throne, and he really had to prove himself to the people of France. He was king from 1589 to 1610, when he was assassinated. During his reign Henri regulated state finance, promoted agriculture, drain swamps to create productive crop lands, undertook many public works, and encouraged education. He renewed Paris as a great city, and everybody loved him. Well, everyone but Francois Ravaillac, the douche bag who killed him. This historical biography is very informative without being dull. 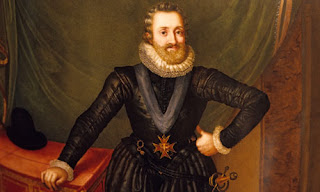 I for one like his stance. His body language is saying, "you know, I may be wearing ruffles and posing in a feminine fashion, but I'm still here to party and save your country from debt and despair."
at Monday, April 02, 2012