the life, not death, of thomas ince.

Okay. Thomas Ince is way before my time. Considering he died in 1924, he's way before my grandma's time. So for those of you who are not ninety years old, here's a short run down. Progressing from actor to director and screenwriter, Ince revolutionized the motion picture industry through developing the role of the producer. In addition to building the first major Hollywood studio facility, dubbed "Inceville," he was responsible for more than 800 films. Back then there was only silent cinema. Actors running around on film without sound. In this biography, author Brian Taves explores Ince's impact on Hollywood's production system, the Western, his creation of the first American movies starring Asian performers, and his cinematic exploration of the status of women in society. And no wonder the book is titled Thomas Ince: Hollywood's Independent Pioneer. 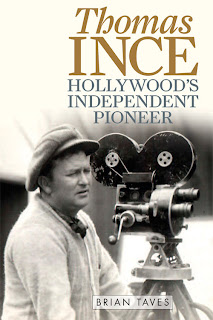 We are all well aware that gossip surrounds Hollywood deaths. It is the one Hollywood constant, especially after Hedi Klum and Seal broke up, going on for decades and still happens today. Michael Jackson, Whitney Houston, Amy Winehouse, Heath Ledger... My point: Thomas Ince was like the first big Hollywood death gossip in the 1920's. That may be all that he is remembered for, until now. Taves wrote this biography to show the life and career of Ince, not to focus on his suspicious death. It's a great bio for you film buffs out there.
at Tuesday, April 03, 2012