I had no idea what an "expat" was when I received a copy of The Expats: A Novel by Chris Pavone, so I did what any good English teacher would do, I looked it up. An expat is a person who is voluntarily absent from home or country. Pretty much describes every character in this book. 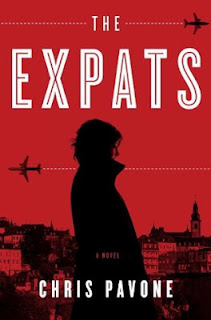 Kate and Dexter Moore are a married couple who basically know nothing real and true about each other. Basically like any other marriage you've heard of. For 15 years, Kate has led a secret life. She lives in Washington, D.C. with her computer geek husband, and her two young children. They have no idea that she is a Central Intelligence Agent. As the years pass and her children grow, Kate decides it would be in every one's best interest to leave her job, and it is perfect timing because Dexter is offered a new job in Luxembourg. So the Moore's make the move to Europe. Now Kate has all the time in the world to notice that her husbands job, working at a bank, seems a bit suspicious. He has long hours, and is becomes very evasive. Kate's spy self cannot help but come out and uncover what is really going on.

Espionage...cocktails...intrigue....the makings for a tasty and twisty thriller if you ask me, even though you didn't ask me.
at Sunday, April 01, 2012