yes you're a liar, but at least you're pretty.

I do wonder about the message behind the Pretty Little Liars book and television series. I mean, not all pretty girls are conniving little bitches. I am mildly offended, actually. And full of myself. 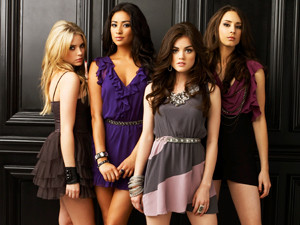 I totally get why teenagers AND my twenty-something friends are addicted to the television series on ABC Family. Pretty girls, pretty boys, high school drama, mystery, intrigue, it's guilty pleasure material for sure. My friends can watch the show in the comfort of their own home, without dealing with judgement. They don't have to worry about the cute cashier at Barnes and Noble, noticing their purchase of five Pretty Little Liars books. You know, if cute cashiers at Barnes and Noble existed. After reading the latest installment of the bestselling series by Sara Shepard, Ruthless (#10), I can see why the teenagers of the world are hooked on the literary version also. 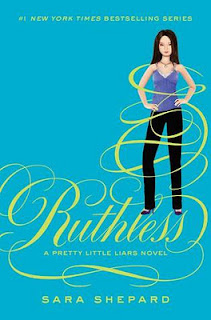 For those of you who don't know, years of scandal have rocked Rosewood, Pennsylvania. Pretty little high school seniors Aria, Emily, Hanna, and Spencer have always been at the center of the drama. They’ve lost friends, been targeted by a ruthless stalker named A, and narrowly escaped death. And (of course) it’s not over yet. Aria’s love life is on the fritz. Emily’s testing the waters, exploring her wild side. Hanna’s sucking face with the enemy. Someone from Spencer’s past is back to haunt her. And their darkest secret yet has been found out. DUM DUM DUMMMMMM.
at Tuesday, January 24, 2012