I totally blanked on reviewing Dry Bones by Craig Johnson, the latest in the Longmire Mystery series that is officially available to watch on Netflix (FYI), another dead guy, another hit. Kudos to Johnson for his interesting subject matter, as a girl with a wild imagination, I really enjoyed this tale. 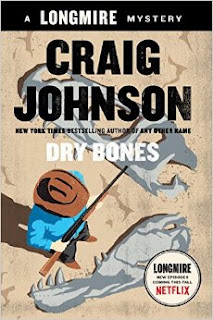 In the 13th installment, a skeletal remains of a Tyrannosaurus rex are found, along with the body of the rancher who's land it was found on. Makes sense since the bones are worth millions. Enter Walt and Victoria to solve the case. It's fast-paced and fun, wonderful to see that Johnson isn't losing his steam.