What I love more than fiction is realistic fiction. I have to be in the right mood to read novels where characters have supernatural powers or with wild plotlines (Harry Potter not included, obviously). Most of the time I want to sit down and open a novel that could happen to anyone. Well, the right anyone. And that's exactly what Kaitlyn Greenidge's debut novel We Love You, Charlie Freeman was. A novel so realistic, it almost happened to her own family. 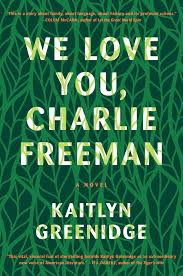 Kaitlyn got the idea for this novel from her mother who was asked, before Kaitlyn was born, to raise a chimpanzee along with her oldest daughter (who was two at the time). Her mother was fluent in sign language, and it would all be part of an experiment for some unnamed institute. Her mother declined, not able to raise a chimp as her own and then have it end. It was this story that gave Kaitlyn the premise for her novel.

The Freeman family (who are all fluent in sign language) left their home in Boston for an apartment at the Toneybee Institute to add a chimpanzee named Charlie to their family of four as part of a twisted experiment. Adding together the moving to an almost all-white community and their strange living situation, the Freeman's feel isolated and their family dynamic begins to fall apart.
at Wednesday, May 11, 2016