Since it's St. Patrick's Day tomorrow, I thought an Irish novel heavy on the Gaelic dialect would be ideal to review.

Adrian McKinty has done a wonderful job setting apart his Detective Sean Duffy series by taking readers back in time (to the 1980's) and to a foreign (to most of us Americans) land, Northern Ireland. I am only curious as to why it took the fifth book for me to hear about it. But oh well, Rain Dogs is freestanding, and I plan to catch up on the rest later. 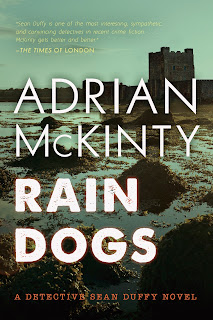 Detective Sean Duffy is funny, he's dark, he's got great taste in whiskey, he always checks his car for bombs before getting in. He's really enjoyable to read about. And in the fifth installment of everyone's new favorite series a journalist is found dead in the courtyard of Carrickfergus Castle, and although it appears to be suicide, Duffy's gut tells him to take another look. To solve the case, Duffy travels to Belfast, London during the height of "The Troubles" and an ice road of Helsinki. The descriptions are great. The storyline is clever. It's not super past paced, but there are still twists and turns. It's not as gruesome as I imagined, what with the times. All in all, a win from me.
at Wednesday, March 16, 2016