The last few novels I've read have been good, but not exactly action packed. I knew I could count on Michael Sears and his Jason Stafford series to give me exactly what I was looking for, a wild ride. And Saving Jason absolutely did. It can stand alone, but I recommend getting to know all of the characters in the three previous installments before diving into this one. A little background, Jason Stafford is former brilliant Wall Street trader, who did some jail time, and is now working as a financial investigator and reports to Virgil Becker of the Becker Financial Group. 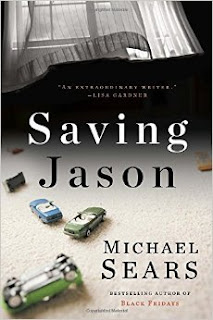 Saving Jason has a dramatic opening when Jason finds himself in a shoot out, and it only gets more exciting from there when he is targeted by the mob and his autistic son (also named Jason, called "The Kid) is kidnapped. His son has to keep to a strict schedule, making his disappearance Jason's worst nightmare, which is saying a lot.
at Monday, March 14, 2016