who is johnny anonymous?

Some of you are going to take one look at Johnny Anonymous, secret author of NFL Confidential: True Confessions form the Gutter of Football, and start playing a tiny violin. I mean, boohoo to the man who was forced from the sidelines to the field and is now making a ton of money to play a game he signed up to play only to complain about it. Me? I get him. As someone who is naturally just not a hard worker (except when it comes to my own business and my house), I feel his pain. He got paid a nice junk of change to do absolutely nothing, and that's kind of my dream. 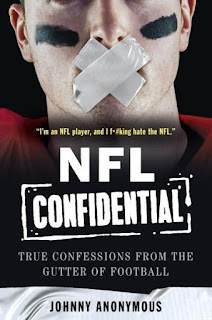 The whole idea behind this book is to share with football fans what really goes down behind the scenes in the NFL. Because honestly, no one realizes how harmful such a game and organization can be. The injuries, the mind games, the pain killers, the racism, the havoc wreaked on the bodies of players, no one cares. And people should. Johnny Anonymous shares the corruption and political drama in such a funny way, you may not even realize how disturbing it actually it is.
at Friday, January 29, 2016

Email ThisBlogThis!Share to TwitterShare to FacebookShare to Pinterest
Labels: Sports