couldn't put it down.

There are certain topics that I shy away from in any social situation. Politics, religion, and race. I am breaking that rule today with my review of Under Our Skin: Getting Real about Race--and Getting Free from the Fears and Frustrations that Divide Us by former NFL player and commentator, Benjamin Watson. Why? Because it was too good to ignore. I work in a city school district, but it's not inner city by any stretch of the imagination, and I still have students (mostly jokingly, but sometimes seriously) calling me racist when I ask ANYTHING of them. They just throw around the word like they have any idea what it means (in this town, I truly don't think they do). 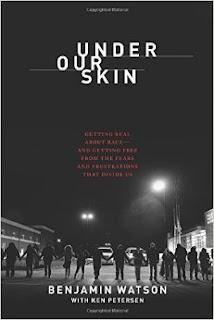 My favorite quote of the entire book is this one: "I'm angry because white people don't get it. I'm angry because black people don't get it, either." THIS SAYS IT ALL. Watson absolutely addresses the issues facing black people today. But he doesn't pretend that he has any idea of what REAL segregation is. Because he doesn't. And he doesn't put all of the blame on white people for the segregation seen today. He wants to know why black people don't reach up and grab the opportunities white people do. I really enjoyed his chapter about growing up and how kids know that black and white looks different, but it doesn't matter, until it does. Until someone makes it matter. In my opinion, that is where the problem lies. You should absolutely read this book for yourself. It gets uncomfortable at times, but Watson is a great writer and his experiences and views on the past vs. the present definitely got inside my head in a good way.
at Friday, January 22, 2016