I wish I was half as funny and clever as Quentin Jacobson and his band of band geeks in John Green's latest book to movie, Paper Towns. I literally laughed out loud at the dialog and shenanigans between this not so popular senior and his faithful friends. Quentin grew up next to Margo Roth Spiegelman in the super touristy area surrounding Orlando Florida. He pretty much loved her from day one, and although they grew apart after the age of ten, (Margo being beautiful and popular), she always made sure her own group of friends didn't both Quentin's. Life was moving along pretty normally as senior year was coming to a close, when one night Margo appeared at Ben's window, face painted black for a night of debauchery. She had a plan. He had his mom's van. And they spent the evening seeking revenge on those who have harmed them and those who have failed them. Quentin was super excited to go to school the next day, to see how his night may have changed his days. But Margo never shows. She has run off again, as she has done many times before, and left him clues. Him. Quentin Jacobson. He can hardly believe it, and then he can't think of anything else. 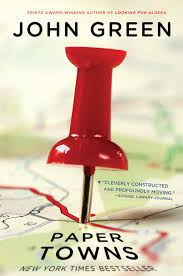 This novel is super relatable for teens. Showing them that people aren't who they seem to be. And pedestals should never exist because they make an ass out of everyone. And how you can't ever really know someone. You just know your version of them. And how running out on your graduation to go find the supposed love of your life is probably not the best idea, but it will make a kick ass story.
at Friday, August 28, 2015