When I was in middle school, I LIVED off of being dared to kiss a boy at a party. What a rush. Nothing romantic about it, but when you're 14, who needs romance? Anna Staniszewski's I'm With Cupid from her new Switched at First Kiss series begins with a dare and a kiss that is much more complicated than anything I had to deal with. You see, Lena and Marcus aren't your average eighth graders, they have supernatural powers, and kissing caused them to not only swap spit, but swap powers with each other. 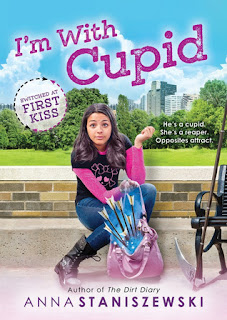 Staniszewski's take on the actual myths of Cupid and the Grim Reaper was super clever. Lena is a reaper (yes, a collector of dead souls) and Marcus the dreamer, is a cupid. They are polar opposites, and by switching their powers, they are almost killing and accidently love zapping lots of inappropriate people. This novel is thrilling enough for your middle school boys, and romantic enough for the girls.
at Wednesday, August 19, 2015