Bah. Stephen King is so creepy, I love it. Until I don't. I definitely picked the wrong week to quit biting my nails because Finders Keepers (his sequel to Mr. Mercedes) is uncomfortably believable, and terrifying, and then there's my blood pressure to think about. But enough about me. 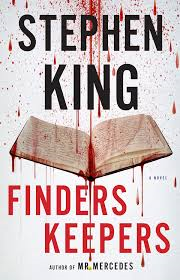 Faithful reader, Morris Bellamy is furious that popular author, John Rothstein has stopped writing books, and also because he doesn't like who his favorite character, Jimmy Gold has become. So Morris murders Rothstein, steals his cash and writing notebooks. Hiding them away before he is locked away for another crime. When he is released thirty-five years later, he is after the high school boy who found his loot. Ex-policeman Bill Hodges, Jerome Robinson and Holly Gibney are working together again to protect the boy and his family because Morris is a raging lunatic. Let's just say I was terrified the whole time. And if readers actually retaliated in real life, Nicholas Sparks would be in big trouble.
at Monday, June 15, 2015