The fo V. C. Andrews is BACK with another fantastic Dollanganger spin off titled Secret Brother which is set at the same time the Doll children are trapped up in the Foxworth mansion attic. The narrator of this novel is sixteen-year-old Clara Sue Sanders who lives in a mansion of her own in  the small and upper-crest town of Prescott, Virginia with her grandfather and little brother, Willie. After losing her parents, she had to grow up much faster than any other girl her age, caring for her younger brother once they moved in with their grandparents. Tragedy struck again when her grandmother passed a few years later. And when a tragic accident takes young Willie's life at the beginning of this novel, Clara Sue is shaken so heavily by her grief she becomes almost unrecognizable. Especially when her grandfather discovers that a little boy about Willie's age was dropped off at the very same hospital, almost dead due to malnourishment and arsenic poisoning (SOUND FAMILIAR????) and her grandfather takes special interest in the boy and his care. When her grandfather suggests that the boy recuperate at their home, in Willie's old room, Clara Sue loses it. And I can't really blame her. As the novel moves forward, Clara Sue fights back her own interest in this beautiful blonde boy, but in the end, she knows that her Willie wouldn't want her grief over the loss of him to overpower her will to help such an innocent doll. 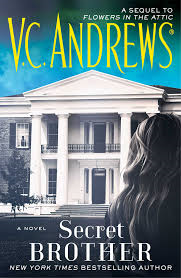 Disclaimer: I read this in roughly 24 hours.