well i didn't see that coming. or that.

I adore spring. The sun is shining, the flowers are blooming and I was able to enjoy yet another fabulous Lisa Scottoline novel, Every Fifteen Minutes. 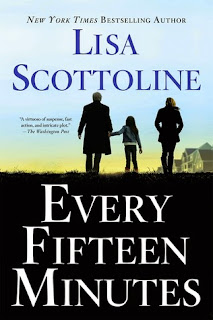 Chief of the Psychiatric Unit at Havemeyer General Hospital, Dr. Eric Parrish has always had it together more at work than at home. His marriage may have failed but his unit has just been named number two in the entire country. I mean, he may be in the middle of a huge custody battle over his daughter, but at least he's a prominent psychiatrist. Dr. Parrish still has some control over his life, that is, until seventeen-year-old Max Jakubowski walks in.

Every 15 minutes, Max needs to perform a set of rituals to help him ease his OCD and anxiety. He touches his right temple just once and says “red-orange-yellow-green-blue-purple-brown-black.” After finding out that his beloved grandmother is terminally ill, his mental state has been getting much worse. Dr. Parrish offered to treat the poor kid privately. But once Max's grandmother passes, and the girl he has a crush on is found murdered, the good doctor realizes he has bit off more than he can chew in this psychological thriller filled with twists you won't see coming.
at Monday, May 11, 2015