Alzheimer's is a touchy subject for me, so I was a little nervous to begin reading Still Alice by Lisa Genova because it involves a woman who is diagnosed with early onset Alzheimer's at age fifty. I'm so glad that I didn't let my minor PTSD from my grandfather having the illness in his eighties keep me from such a wonderful story. But it is scary to think about. 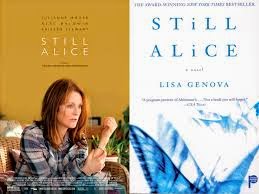 In the book, Alice Howland is a brilliant cognitive psychology professor at Harvard who is held at a very high standard of excellence even in a sea of male colleagues. Her husband, John is also a professor at Harvard, and together they created three successful children. Alice realizes something is wrong with her when she gets lost walking home from work, a route she has taken many times. She had experienced minor memory losses in the past. Where are my keys? Where did I put my Blackberry? Losing a word during a lecture. That sort of thing, but nothing major until she found herself completely lost in her own neighborhood. She set up an appointment with her doctor, then a neurologist, and was diagnosed with early onset Alzheimer's, with no real hope of a cure, only the possibility of stalling the disease that eats away at your memory, but leaves you completely healthy physically. The story is set up in chapters by month, and each month we see Alice decline, we see her losses, like when she needed to give up her position at Harvard, but we also see her wins. She sets up a support group for people with early onset dementia, and speaks at a conference on the subject, explaining how important it is that caretakers and others who have people with dementia in their lives, realize that their days are still important even if they don't remember them. It's really a beautiful story. The decline is sad, and readers see that first hand, which can be painful if you've had a family member with this disease. But seeing Alice's children support her, and getting inside her head, even if it was crazy sometimes, I don't know, I just thought it was so beautiful, because she was still Alice.
at Wednesday, March 11, 2015