I'm sure I've mentioned this more than twice, but I'll say it again. I was SOOO sad when the Veronica Mars television series ended. Almost as sad as I was when Gilmore Girls ended, and that says a lot. At least Rob Thomas has had the decency to make a motion picture AND two books. The second of which I will be reviewing today. 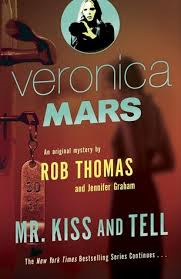 First of all, I LOVED Mr. Kiss and Tell, probably even more than the first installment of this television, turned movie, turned book series. The reason I loved it most is because so many characters from the television series were incorporated so easily into the novel. At times, it was like I was right back at Neptune High with Veronica, which may be bad for her, but good for readers. Veronica has been asked to solve a brutal rape case that took place at the Neptune Grand. Her job was to prove that a Grand's employee did not commit the crime, which she easily does, but you know Veronica, she can't just leave well enough alone and must go after the real bad guy, especially after she finds out who the victim was. Meanwhile, Keith has teamed up with Weevil and my favorite lawyer, Cliff to take out Sherriff Lamb and his entire corrupt department. Great storyline and great writing by Rob Thomas and Jennifer Graham. I haven't heard talks of a part three, which makes me a little nervous.